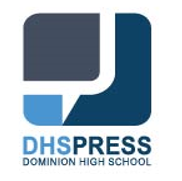 STERLING, VA —  Quill and Scroll international honorary society for high school journalists awarded four Dominion high school students with the award for the 2020 best video feature package for their video titled “No Labels Attached: LatinX- ‘We Came Here for a Better Life.’”  The piece, produced by Nicole Calderon, Yeishaliz Cancel Ortiz, Allison Ferguson and Kelsey Golden, was produced for PBS NewsHour Student Reporting Labs (SRL) as part of their work in broadcast journalism I and for DHS Press, the student news organization at Dominion.

“As our first video project, I didn’t expect anything to happen of it. Of course, I was thrilled with how it turned out. My group and I worked really hard on the piece together, and I couldn’t have asked for a better group of girls,” said sophomore Allison Ferguson.

The piece centers around two students at Dominion and examines the stereotypes about being an EL student. “While I’m honored that we have been rewarded with this gift, the true recognition deserves to go to Sarai and Cesar. Without them, this piece never would have taken off, and I’m so proud of them for sharing their stories and opening up about their place in the world. We put the piece together, but they shared their stories, and that is the biggest reward. I would like to thank my teammates and my teacher for helping us create a project and tell Cesar and Sarai’s stories as they were meant to be told,” Ferguson said.

“This is an incredible accomplishment by itself. Considering that the four students who produced it were working on their first full piece, this is even more amazing. They worked so hard to complete this, never letting obstacles they faced get in their way of seeing it through. I am so proud of them. It just shows the power of the youth voice and their ability to tell important, impactful stories,” journalism teacher and DHS Press sponsor Mitch Schwartz said.

Sophomore producer Nicole Calderon said, “While making this video, our group did encounter many issues. We would always face problems when trying to shoot b-rolls or interviews. Because most things didn't go as planned, we felt discouraged with our progress and final video. Being able to win in a contest like this makes those problems we faced worth it.”

The feature was recorded in the fall of 2019 and was posted on January 13, 2020. Quill and Scroll received over 2,400 entries from five countries in the 30 categories.

Student Reporting Labs, with over 150 schools and clubs across the country, engages 3,000 students per year to produce original reporting on important local issues from a youth perspective. Recent series include teens and vaping, immigration, school safety, local public art and the impact of stereotyping.

Dominion has been working with PBS SRL since 2017. Their piece Tiny Coders, aired on NewsHour on April 10, 2018.