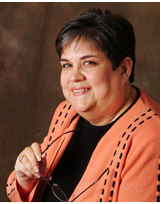 Photojournalism instructor Martha Akers is beginning year number 40 at Loudoun Valley. For the past 20 years, she has taught all levels of Phototjournalism and Journalism. Prior to that, she taught English 9 Honors and sponsored the yearbook as an extracurricular activity.
The Virginia High School League inducted Akers into its Hall of Fame, Monday, October 27, 2008. One of 11 honorees, she was honored as a contributor to league's program, specifically her contriburtions to the scholastic journalism areas at the league. Currently Akers, working with the league, directs a series of one day fall journalism workshops around the state.
JEA’s 2005 Yearbook Adviser of the Year, Akers has been advising yearbook and photojournalism at Loudoun Valley High School for 30 years. Her students’ yearbooks have been recognized at the state and national levels. The Saga has received NSPA’s Pacemaker, CSPA’s Gold Crown and VHSL’s Trophy on numerous occasions. At this time, the Loudoun Valley yearbook has the longest winning streak of any VHSL activity with 25 consecutive trophy awards.
Akers, who speaks at and directs conventions and workshops nationwide, has also been awarded CSPA’s Gold Key, VHSL’s Lifetime Achievement Award, and SIPA’s Distinguished Service Award. She has also been inducted into OIPA’s National Scholastic Journalism Hall of Fame, and in 1999 she received JEA’s Distinguished Yearbook Adviser Award. A contributor to various scholastic journalism publications, Akers co-authored CSPA’s Scholastic Yearbook Fundamentals and the CSPA yearbook critique. She has also served as a co-editor for the Jostens 1, 2, 3 Yearbook Curriculum.
Akers received her Bachelor of Arts in English from Bridgewater College, Bridgewater, VA and her Masters of Arts in Editorial Leadership from George Mason University, Fairfax, VA. From 1980-2001, Akers taught various levels and grades of English at Loudoun Valley, then in 2001 she began teaching all levels of photojournalism.