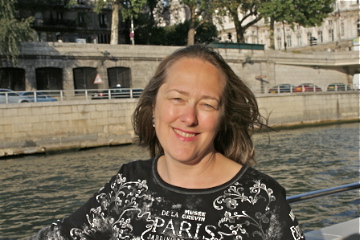 Madame Engleman, a Francophile herself, is exhilarated by the golden opportunity to now teach at a school whose principal is also a Francophile!  Madame Engleman’s native language is French.  She attended the French International School in Washington, D.C. during her primary years, as well as the majority of her middle school years.  Upon graduation from college, she worked at the International Monetary Fund in Washington, D.C., in the office of the Executive Director for France.  Business was conducted primarily in French.  Madame Engleman travels frequently to Europe.

Madame Engleman took a leave from her corporative career to raise and homeschool her two children.  Inspired by the way her two offspring blossomed under her care and her love of pedagogy, she took the requisite education courses at the University of Virginia, Falls Church campus.  She has shared her affection for the French and Spanish languages and cultures in the public education system since 2001.  Madame Engleman has had the chance to work as an educator in four schools in Prince William County.  Brambleton Middle School will be her fourth school among Loudoun County Public Schools.  She comes to Brambleton MS from Stone Hill MS.  She perceives that her exposure to students and their guardians, co-workers, and administrators in a variety of settings has engendered a breadth of experience that benefits her students and colleagues alike.  She is sensitive to the whole child and seeks to integrate technology and kinesthetic activities into her classes as much as possible.

Madame Engleman is a lifetime member of Optimist International.  As a former local 4-H club adult volunteer, she hatched and raised chickens, and led classes in nutrition and cooking.  Besides traveling, Madame Engleman enjoys gardening, writing poetry, and spending time with family and friends.