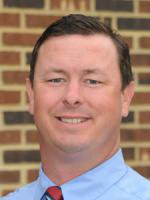 It's a great day to be a Bulldog. The 2021-2022 school year will be Mr. Wolf's 9th year teaching high school and second at Stone Bridge. He will be team teaching Earth Science, Enviromental Science and coaching football this year.  Mr. Wolf earned his Special Education certification through University of Virginia-Wise and has taught in six different content areas. In 2006 he completed a Masters Degree in Education from Southwest Minnesota State University and graduated from Principia College in 2000 with a BA in Sports Management.  Mr. Wolf grew up in Fauquier County and attended high school in St. Louis, Missouri where he was a varsity football and baseball player.

Prior to teaching and coaching in high school, Mr. Wolf coached football for five different college programs over a 15 year span. Mr. Wolf has traveled and lived through out the country as a coach and educator. He served in the United States Navy for three and a half years as an Aviation Ordananceman while stationed at Naval Air Station Lemoore, California. After a medical discharge, he returned to college and played four years of football and three years of baseball at the Division III level.

As an avid outdoorsman, Mr. Wolf loves adventure and sharing life experiences with his students. He is married with an 9 year old son and enjoys spending time at his camp, hiking, hunting and fishing. Mr. Wolf is excited to support and encourage each students possitive success.